Building a Bike Friendly Community is Great for Local Business

The media has been a buzz lately with articles weighing the pros and cons of spending public money on bicycle lanes, trails and other cycling related infrastructure in our shopping districts. And with the rapid increase in popularity of cycling within the Waterloo Region over the past 5 years, I wanted to find the answer to the question “Does building and implementing bike friendly roadways, have a positive impact on local business?”

If you listen to the opinions of most main street business owners, they claim that converting valuable car parking spots into bike lanes is bad for the local economy. Some retailers who think that their revenue is directly related to the number of street side vehicle parking spots have been vocally opposed to the implementation of bike lanes. They see the car driving consumer as ones to be protected at all costs while cyclists “don’t have any cash to spend”. A local business operator who wishes to remain anonymous stated “the City is taking away our parking spots right out our front our door and replacing them with a bike lane which is bad for business”. Retailers just don’t see cyclists as prospective customers. 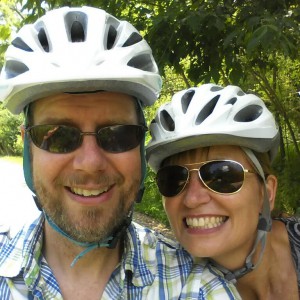 Waterloo Region isn’t so sure that investing in bicycle lanes is bad for business. In fact, Waterloo Region’s first segregated bike lanes are scheduled to be built on Manitou Dr. between Homer Watson Dr. and Bleams Rd. in 2016. The 6.3 million dollar structure was approved by council and will provide bike lanes on both sides of the road set apart from traffic by a 70cm road mountable curb. There has been heated debate about this issue and the impact it will have on drivers and local businesses. Advocates for active transportation urged councillors to follow through on their own policies of making streets more walkable and accommodating for cyclists. The Manitou lanes will be the first segregated lanes in Waterloo Region. Local businesses are upset that with the implementation of these bike lanes, they will be losing valuable road frontage and parking for their customers.

After doing some research, it looks like the Region of Waterloo may be right. There is in fact a growing body of evidence which proves that cyclists actually spend more money at locally owned businesses than car driving consumers.

Portland Oregon has a bike friendly city government and has been hearing these complaints loudly from the retail community. The Oregon Transportation Research and Education Consortium surveyed over 20,000 consumers walking out of supermarkets, convenience stores, restaurants and bars over a 1 month period in 2013. Drivers obviously still made up the bulk of the consumers purchasing at these establishments. Also there was no surprise that most of the grocery store consumers had a vehicle with trunk space to take home their purchases.

What was surprising was that cyclists actually spent more money at local merchants over the course of the month. Cyclists and pedestrians visited a store multiple times, while a driver would load up on purchases on one or two visits. The walkers and cyclists who participated in the Oregon Study made more frequent trips to bars and restaurants and subsequently spent $75.66 more over the month than the car drivers. A similar study conducted in Vancouver by the Mintel Group, found that regular cyclists have more disposable income and spend more money at local shops than those who drive to the location. These regular cyclists were loyal consumers and supported locally owned businesses more frequently than the driver consumers.

The retailers belief that there is a direct correlation between increased profits and ease of parking for car driving customers is in fact the opposite of what these studies confirm. Bike Lanes and Bike Parking increase traffic to downtown shops and actually help business. On a visit to Uptown Waterloo I noticed two bike parking corrals completely full with bicycles. A survey of 1200 consumers in Bern Switzerland found that businesses made more profit per square metre of bike parking ($9,900 US ) than car parking ($8,800 US). One on street parking space can fit 12 bicycles compared to just one car. Increasing the amount of bike parking in a downtown core is less expensive than car parking spots and gives the retailer more potential customers.

In Uptown Waterloo, there are two options for accommodating cyclists on busy King Street. Council will be installing either segregated bike lanes (the first within the city) or wider sidewalks with less room for vehicles. The creation of a multi-use bike friendly core is designed to accommodate the driver and cyclist. This issue has been hotly debated by the Uptown retailers who believe that they depend upon street-side parking for their customers. These retailers see that any restriction of car parking spots would ultimately hurt business.

It looks like it’s time for our local business owners to try thinking a little more broadly. Sure many of their customers will never give up their cars but the growing majority of their customers are just waiting for an opportunity to visit them by bike. By providing safe and easy cycling routes throughout our shopping districts we encourage a different kind of consumer. The new ones are those who are more in tune with their community and they want to do business with local merchants. That’s what builds good business and a good community.

Be the first to comment... Fill in the form below.

Send us your feedback: